skip to main | skip to sidebar

My girls this year 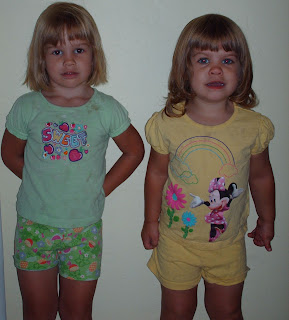 Here's what my girls look like as of August 2009.  The one in Green is my 4yr old, her lil sister is next to her and she's 2 and a half yrs old.  They are my pride and joy, very beautiful little girls!
Posted by mary at 1:58 AM

i plan on making this a blog writing about things i think about regarding Orthodoxy and my journey to the Church and back again.

Then while in that church group i talked to a friend (who shall remain anonymous) and they told me about Orthodoxy. At first i was unsure about all of it. Eventually he got me to go to an Orthodox church that i didn't even know was near where i lived at the time. i also eventually decided to do this because i was having a lot of emotional/mental difficulties for lack of a better way to put this. i was feeling very confused and needed to speak with someone who could clear my head. i was unhappy in the sspx for reasons i will not go into on here. i needed to find somewhere i could call home, somewhere i could belong more.

Maybe i jumped into being Orthodox too soon and got too traditional and 'strict' and overboard with everything once i did become Orthodox because in about 2006 i left. i don't remember what made me first decide to leave but i did. i started demanding signs, proof that God exists, unhappy with the signs i was already getting. i was unhappy with the answers to my prayers that i thought weren't being answered. You could say i was acting like some spoiled child at this point. i was right and no one could tell me otherwise. i thought i was happy too. i convinced myself that this was the right move, that i wasted my whole life that i've lived so far and that it was time to stop having imaginary friends.

i didn't even have a good reason to not go back to the Church. i was feeling very confused and i badly needed direction. Since my husband decided he was going back i talked to him alil and asked him questions. i decided one night to just read the psalms with him that if God didn't exist there'd be no harm done. Maybe i'd even get some answers somehow. Well, i allowed myself to be more receptive (not sure if this is the correct word here) and i listened to my husband reading the psalms. i just let myself relax and listen. As i relaxed i did feel more calm, it felt as relaxing as a nice comfortable warm shower on a fridgid cold night. i just suddenly realized that maybe i was actually wrong and i should stop being such a stubborn "blind" and "deaf" brat.

i'm having some problems with some stuff yet but i'll probably struggle the rest of my life, especially with certain things. We all have our crosses to bear and maybe i'll go to confession for the 'same sins' everytime, maybe i won't. We aren't supposed to dwell on our past sins and are supposed to 'forget' our past sins. i do hope to be a better person all around and to be a good example to others. i also really hope i will no longer be a temptation in any way to any of my friends or to anyone i may meet on my journey.

To answer a friend of mine who asked 'why don't you go all the way home and back to the roman catholic/sspx church?' the Orthodox Church is my home. This is where i belong. When i was a Catechuman in the Orthodox Church i felt it was my home too. i've just recently been like the prodigal son you could say. i'm back home now though and i'm almost a hundred percent certain of that.
Posted by mary at 7:54 PM